Bonjour from chilly Paris, where it is currently gray and the temperature is at 3degC.

Can you believe it? Today is the first day of December! After over a week of living in this beautiful city during their second confinement, President Macron eased the rules of the lockdown by allowing shops to reopen on November 28, Saturday. While restaurants will remain closed until January 2021 (which is just so sad), at least the department stores, small boutiques, and luxury brand shops are allowed to operate again — a good way for the economy to do a little catch-up before the year ends. Boulevard Haussmann (pronounced Osmann) which is home to 2 big department stores or grands magasins, Printemps and Galeries Lafayette, was going to be busy that day, with a throng of shoppers expected.

I was one of the countless people excited about the prospect of being able to go into shops again (haha shopaholic much?),  but at the same time I had a lot of reservations about being out and about where there may be a lot of people again. I have been extremely careful and almost to the point of paranoid back when I was in Manila, spraying everything with alcohol, and in Paris no one seems to carry alcohol sprays like I do haha. Most of them only have small bottles of alcohol gel on them.

The the danger of crowds is this — Covid-19 contamination spreads fastest that way, especially if people are not careful and don’t practice social distancing. From what I have observed, most people on the street wear a mask, though there are a handful who don’t wear them properly — their noses are sticking out of their masks (eeps). I just hope that people are responsible on that day, or else the numbers will jump again. And that would just be sad, especially with December coming.

Saturday morning came. It was a cold but sunny day — an excellent sign! Had a quick brunch at home before heading to the shops. I was prepared. I made sure to line my mask with an extra filter that day — I sounded like a muffled Darth Vader when I talk haha but hey, better safe than sorry! I filled out my online attestation or travel permit, was allowed to be out for 3 hours and within 20km from home. I don’t know if this is strictly enforced the way it was during first confinement, but best to stick to the rules to avoid any complications.

When I got to Boulevard Haussmann, I saw the crowds — I was told there were still no tourists in Paris, so these were all locals.

WOW, out to shop with a vengeance! There were really quite a bit of people on the streets — it was almost like a normal weekend in Paris again. 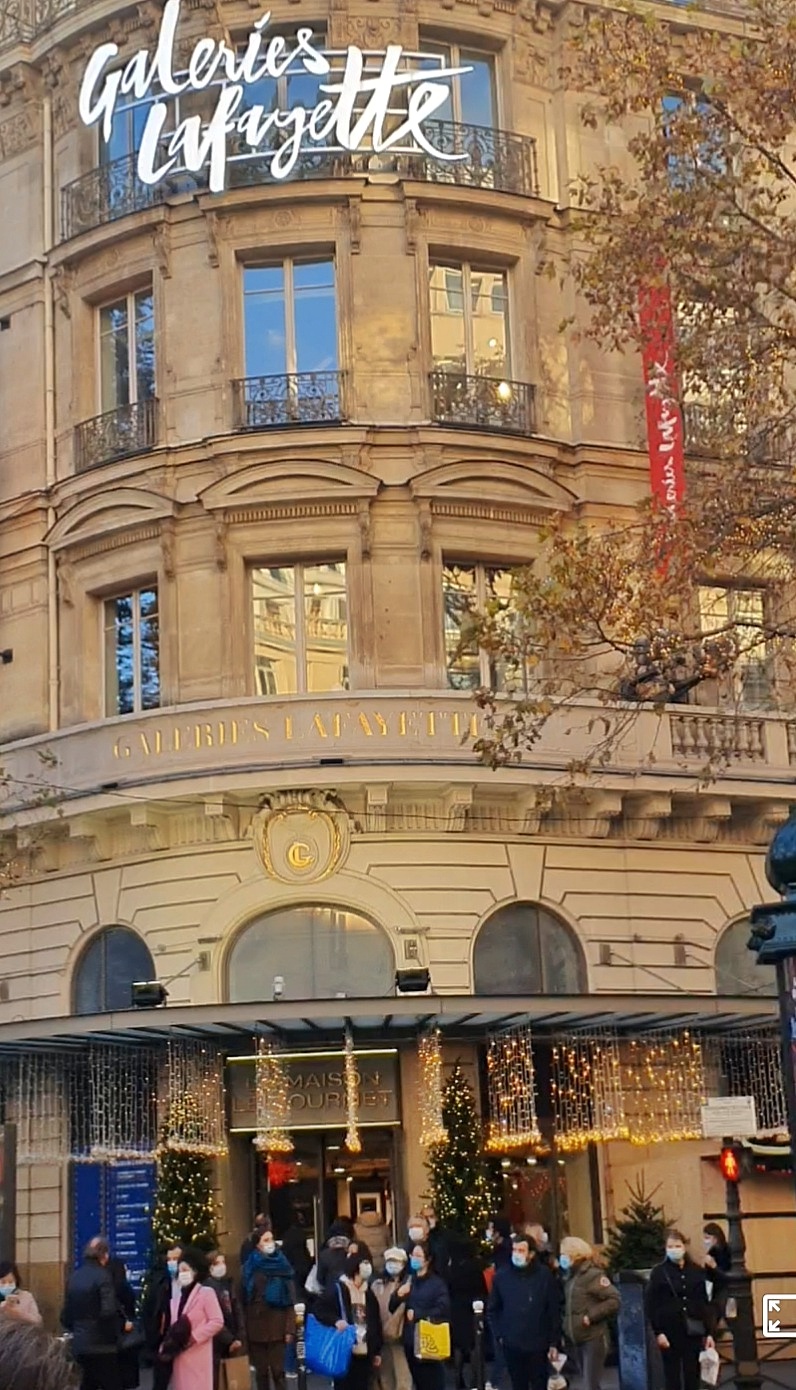 And though initially I felt fear and panic, I relaxed a little and got into the festive spirit of the season like everyone else. But I did stay away from the crowds after I had taken photos and videos for Instagram, so you could all be part of my “journey.”

I decided against going into either grands magasins because I knew everyone would flock there either to see the Christmas vitrines or just go shopping inside. I decided to walk around Palais Garnier (Opera) and funnily, even saw a Dyson store with a long queue outside! 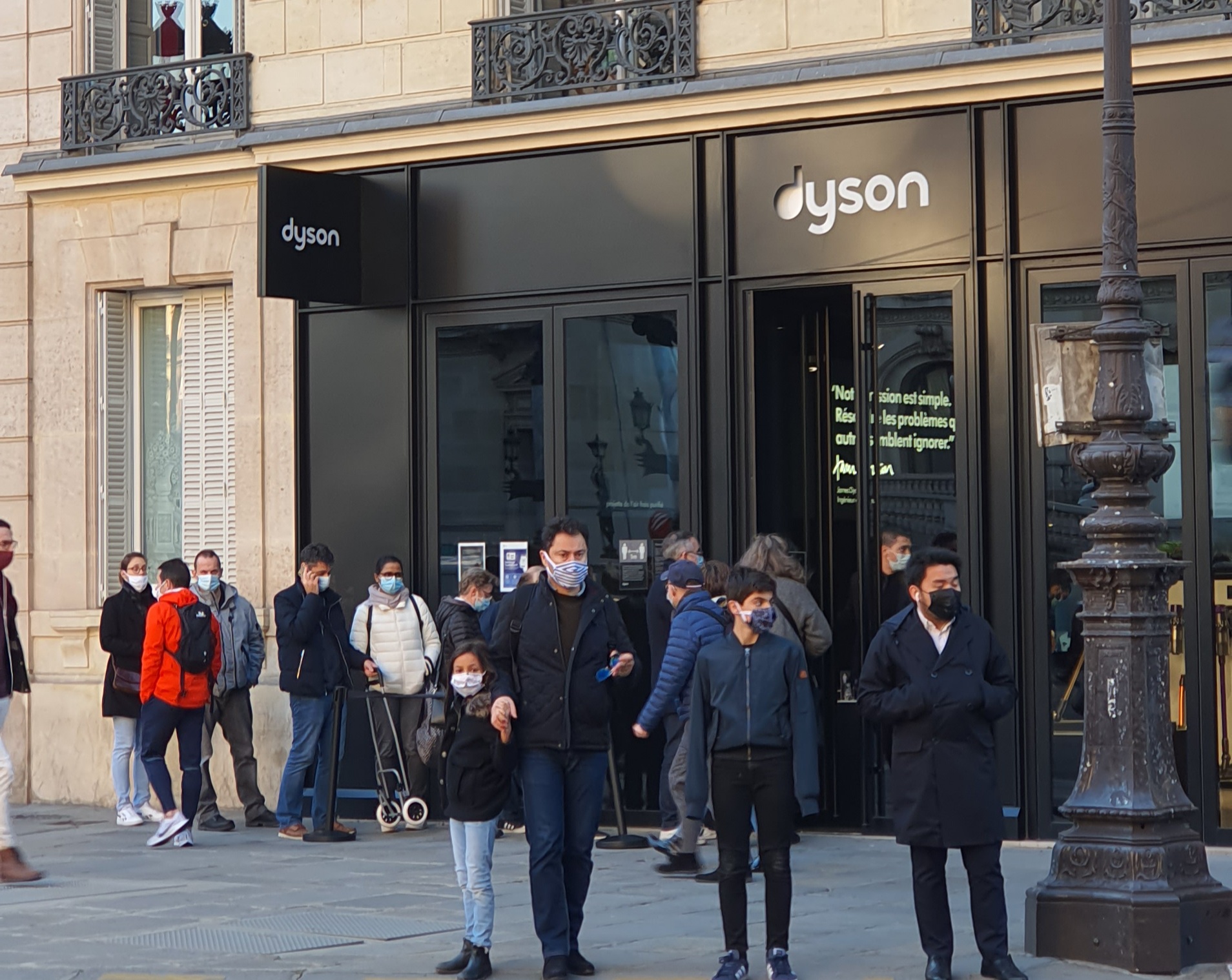 French people seem to take their house cleaning seriously haha!  and cross Place Vendome where the shops at Saint Honore were waiting 🙂 Saint Honore was not very busy at all. This shopping street seems to be more popular among tourists than among locals. And since there were no tourists at this time, the street was actually really pleasant.

I decided to write about my shopping experience at Louis Vuitton Saint Honore, because that was where I spent the most amount of time. There was no queue outside the store, and upon entry, I was greeted by 3 people — a lady who greeted me with bienvenue (welcome), a man who pumped alcogel (gel hydro alcoolique) into my hands, and another woman who asked if there was anything I was looking for in particular. To be honest, I had no intention of buying anything — I have not bought anything from Vuitton in years (my last 2 Vuitton bags were the Frank Gehry box and the Mini Palm Springs World Tour). I was just curious to see if people were buying LV bags again, and more curious if there were any new shopping procedures they’ve adopted since the pandemic hit. The store can accommodate 140 people, maximum, but since the building is large, there was no issue with social distancing — I felt very safe, and with my mask on. 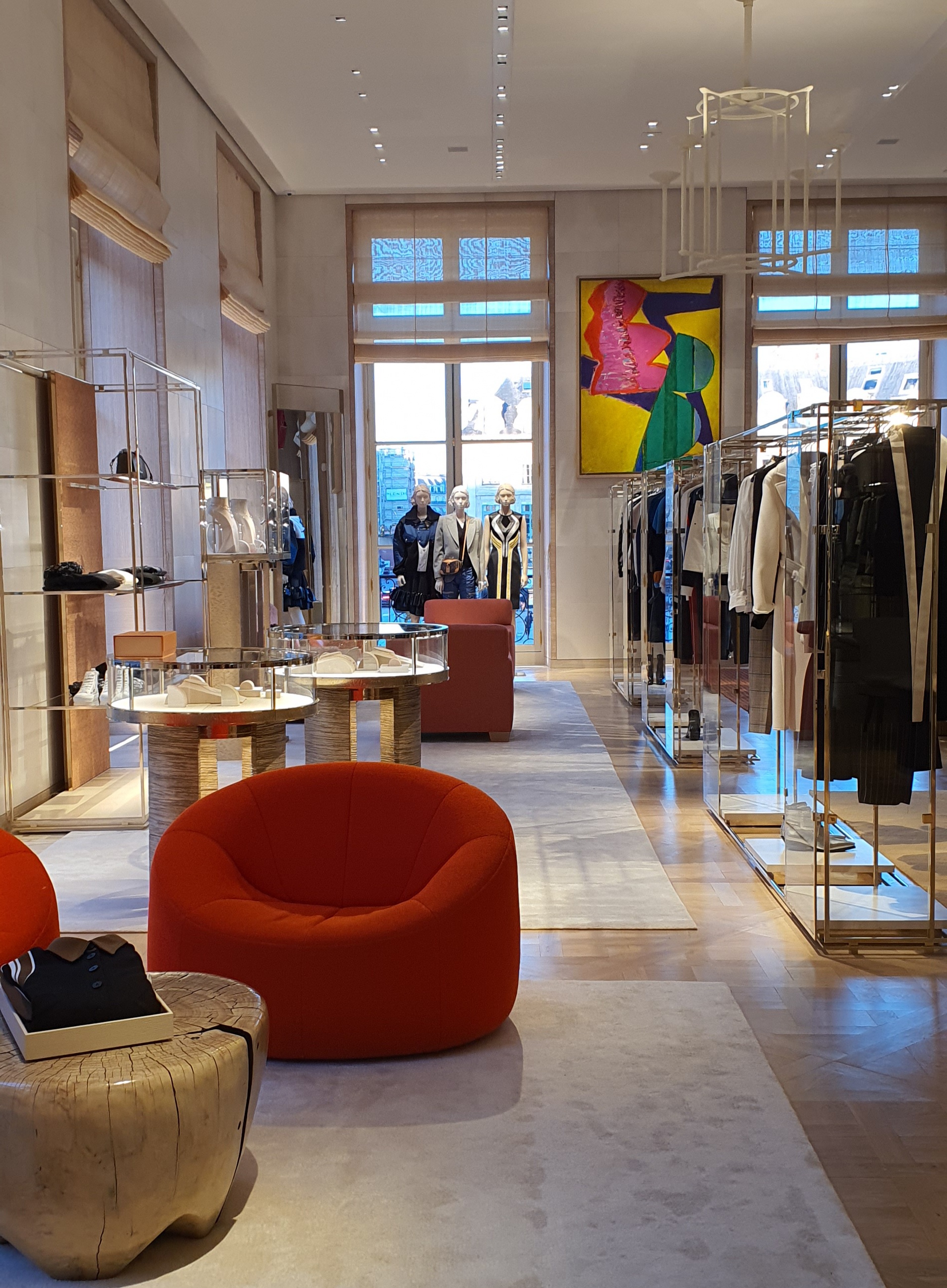 I was accompanied by my SA throughout my “tour” of each floor to check out the new merchandise, with her updating me on what had been happening during the confinement. 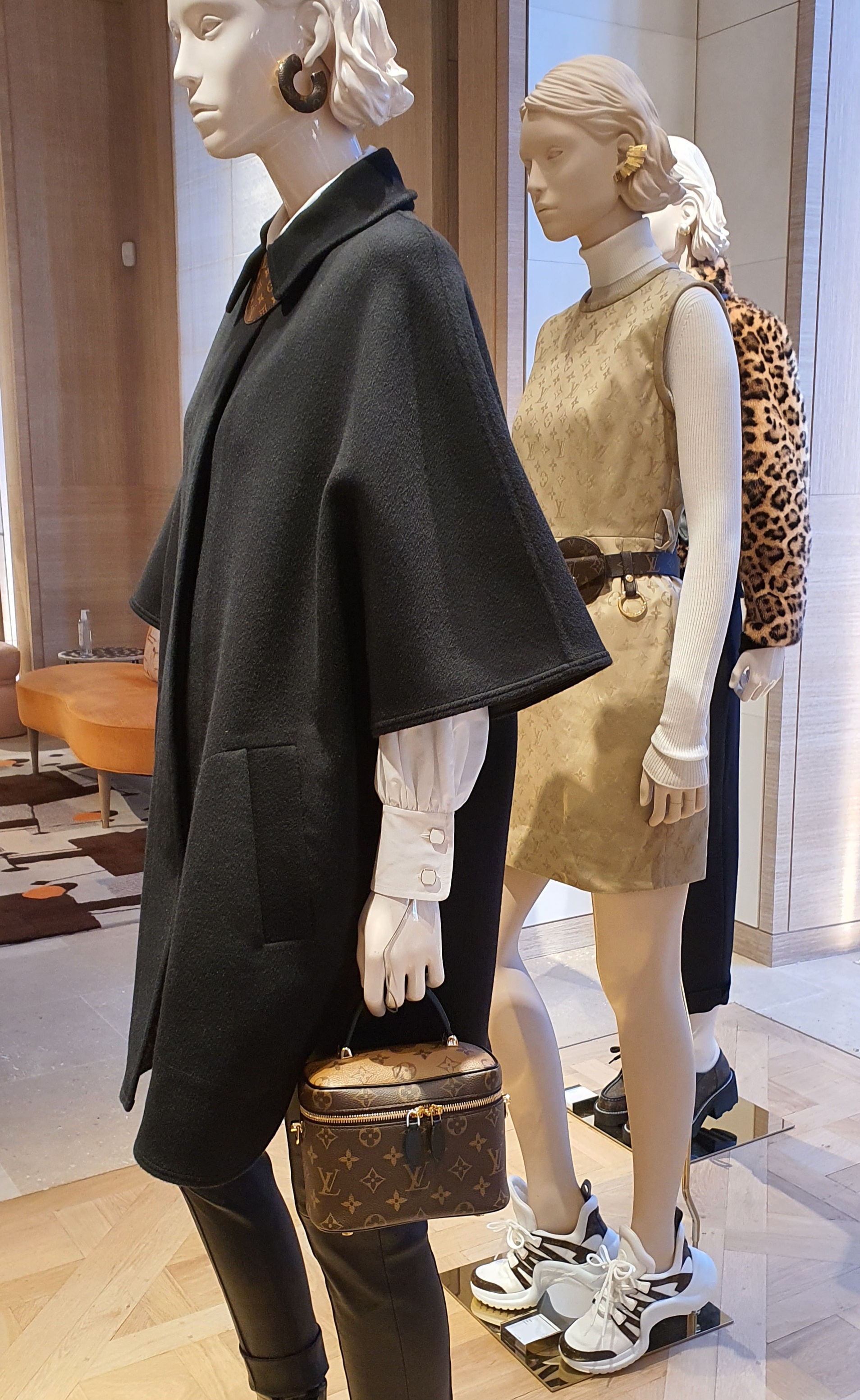 After going through the collection, I asked about the bags I was interested to see. I knew that bags like the Petit Sac Plat, 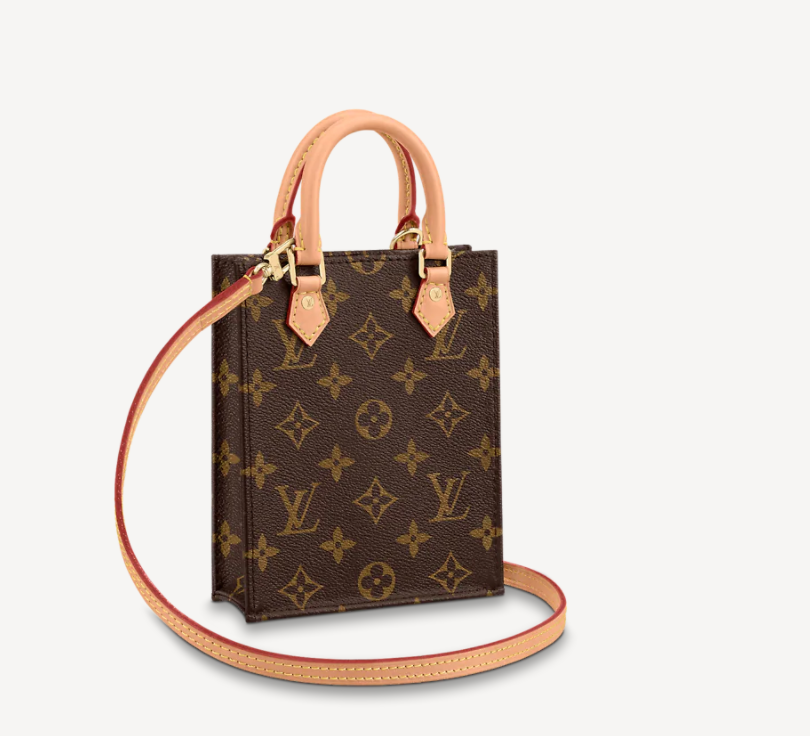 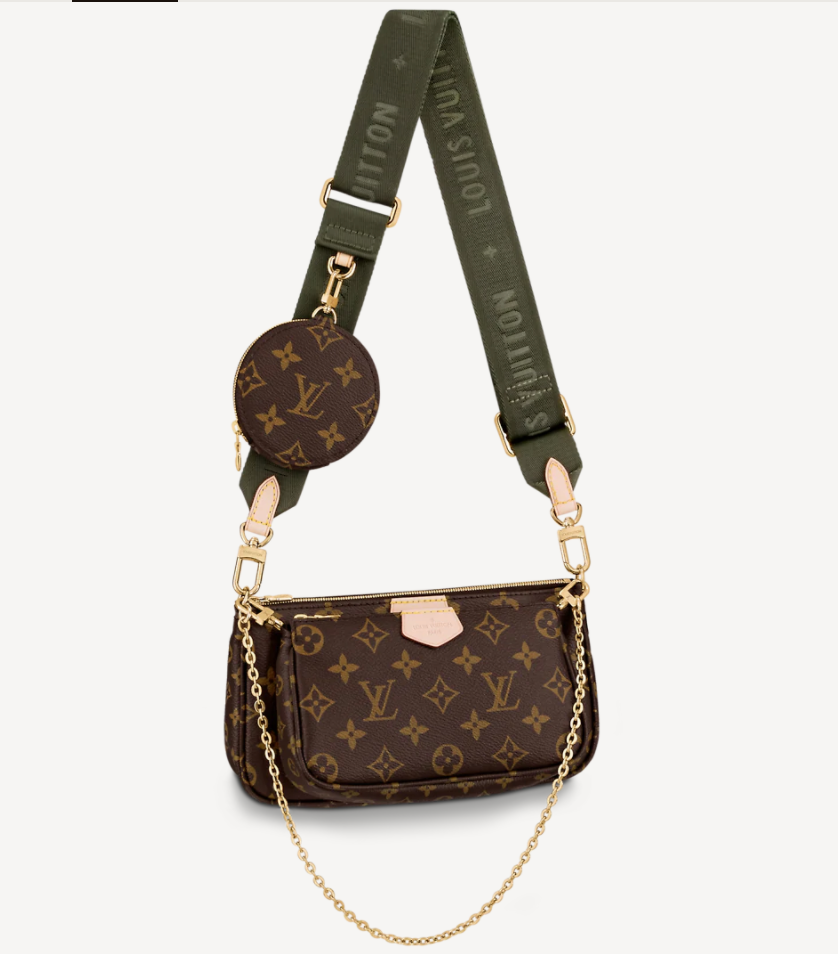 and the Sac Coeur Game on,

were nearly impossible to find in many boutiques, so I tried my luck.

I was told that the Sac Coeur was on order basis, so if I had wanted it, I can still order. Made me really think about it because it’s a cute bag, though I wasn’t sure if my phone would even fit in it. The shop also had the last 2 pieces of both the Petit Sac Plat and Multi- Pochette Accessories. So I asked to see them.

The Multi-Pochette Accessories is essentially just 2 different- sized pochettes and a round coin purse attached together by a thick sport strap and a shorter chain. It is definitely a very functional bag that you can carry many ways. I noticed though that there are hardly any leather parts on the bag and though I can understand why it is a very popular bag, I don’t quite see its value like I would with the Sac Coeur, which by the way is only `180 Euros more in price. The Sac Coeur Game on Bag is just cute 🙂

The Petit Sac Plat won me over because it was small, has 2 rolled leather handles and a long vachetta strap, fits my phone, and is a pretty no- fuss piece. Plus it was also 500 Euros less than the Multi-Pochette bag.

And so… Merry Christmas to me? Lol! Ok honestly I haven’t decided if I will keep this bag just yet, so stay tuned on @thebaghagdotcom, just in case 😀 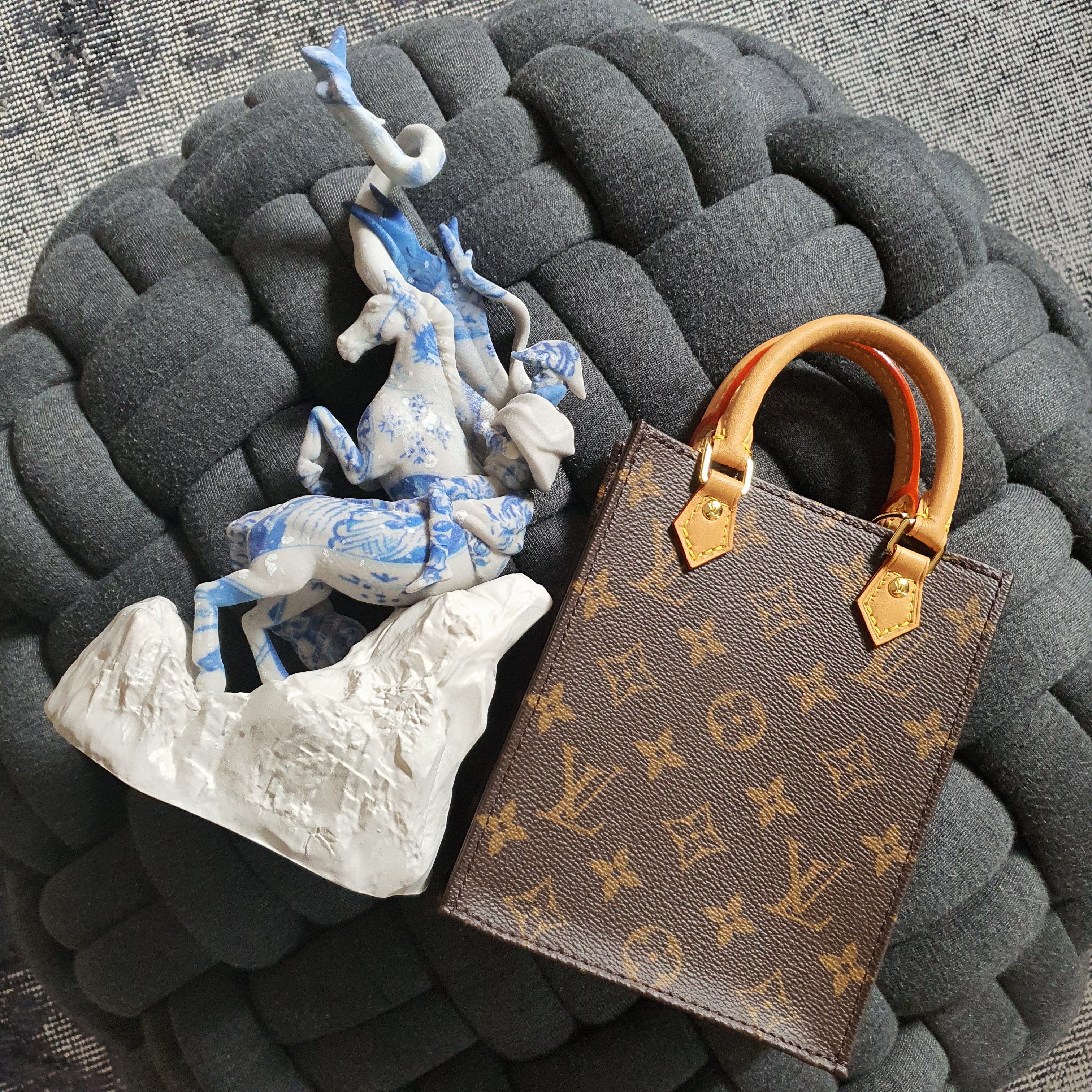 The transaction was seamless and easy and throughout the stroll inside the store, I felt safe. There were really so few people and I might actually have been the only Asian customer in there at the time. Interesting times really because the rare occasions I used to drop by Louis Vuitton, the shop would be full of Asian tourists and hardly any French locals!

By the time I “sweeped” the LV store, it was already dark outside. 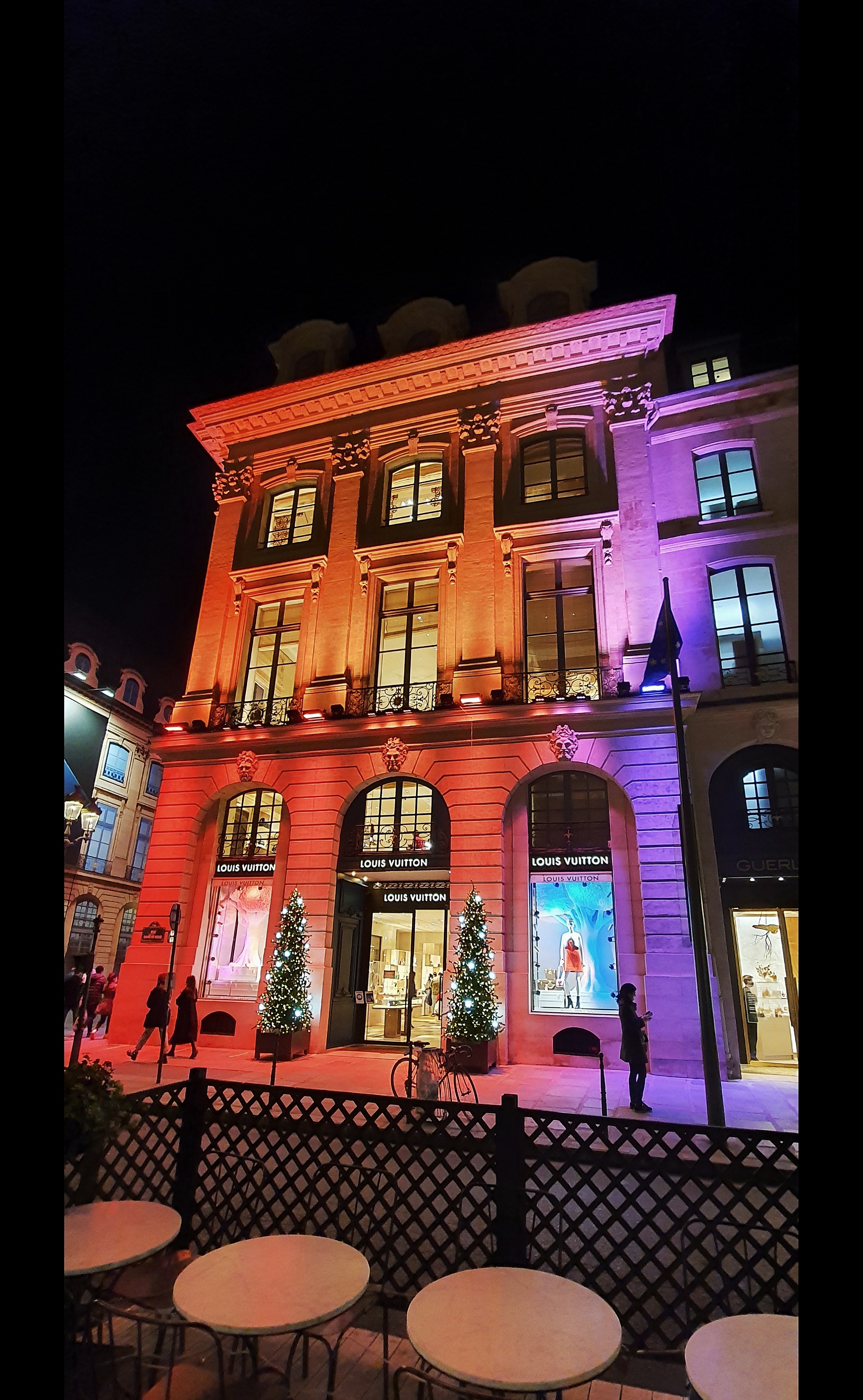 The building was already all lit up, and even the shops along Place Vendome had their trees lit up as well. 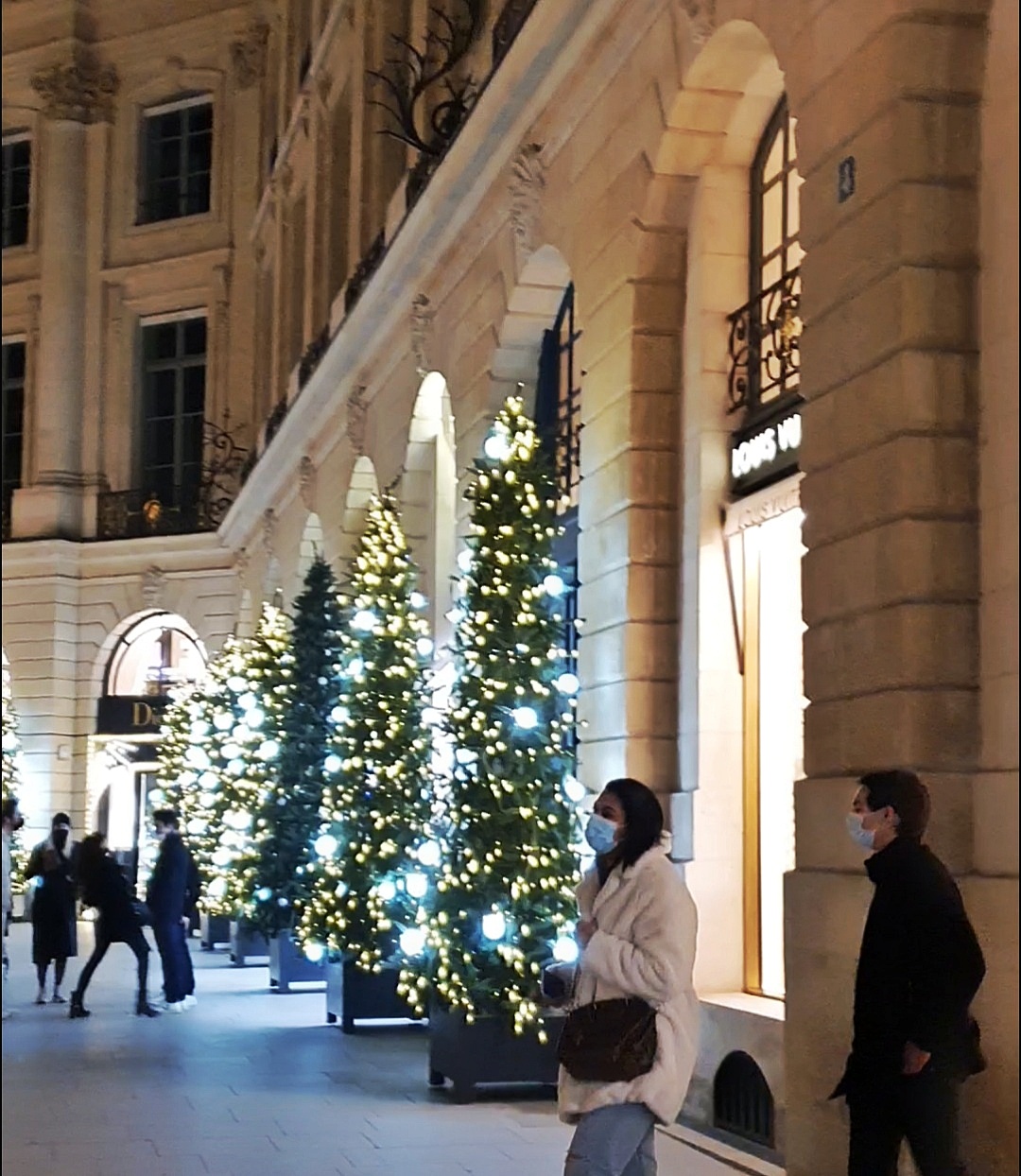 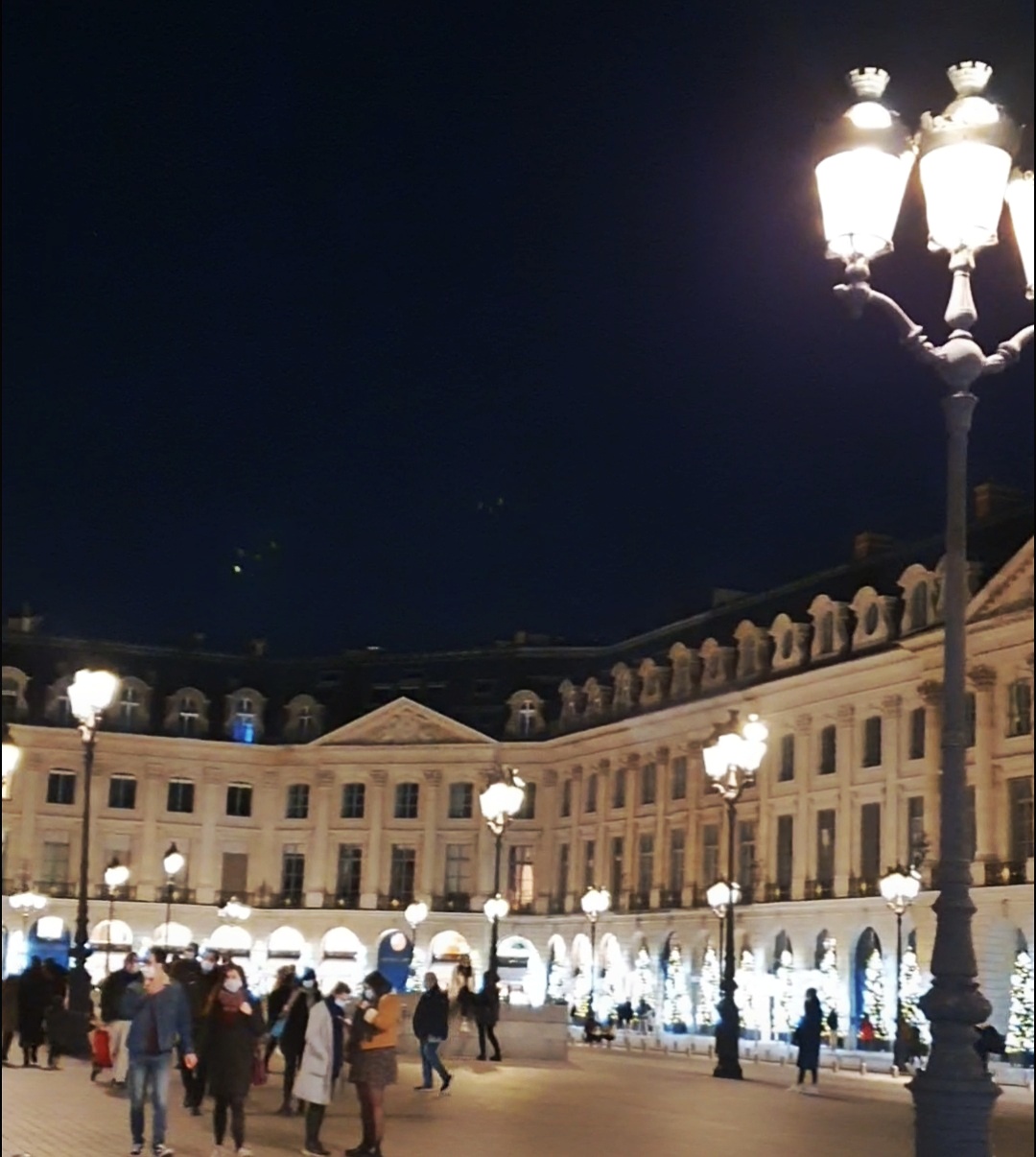 It was so pretty! I passed by the Opera again and saw people lounging around by the steps, perhaps the spot of their rendezvous because all cafes are closed. 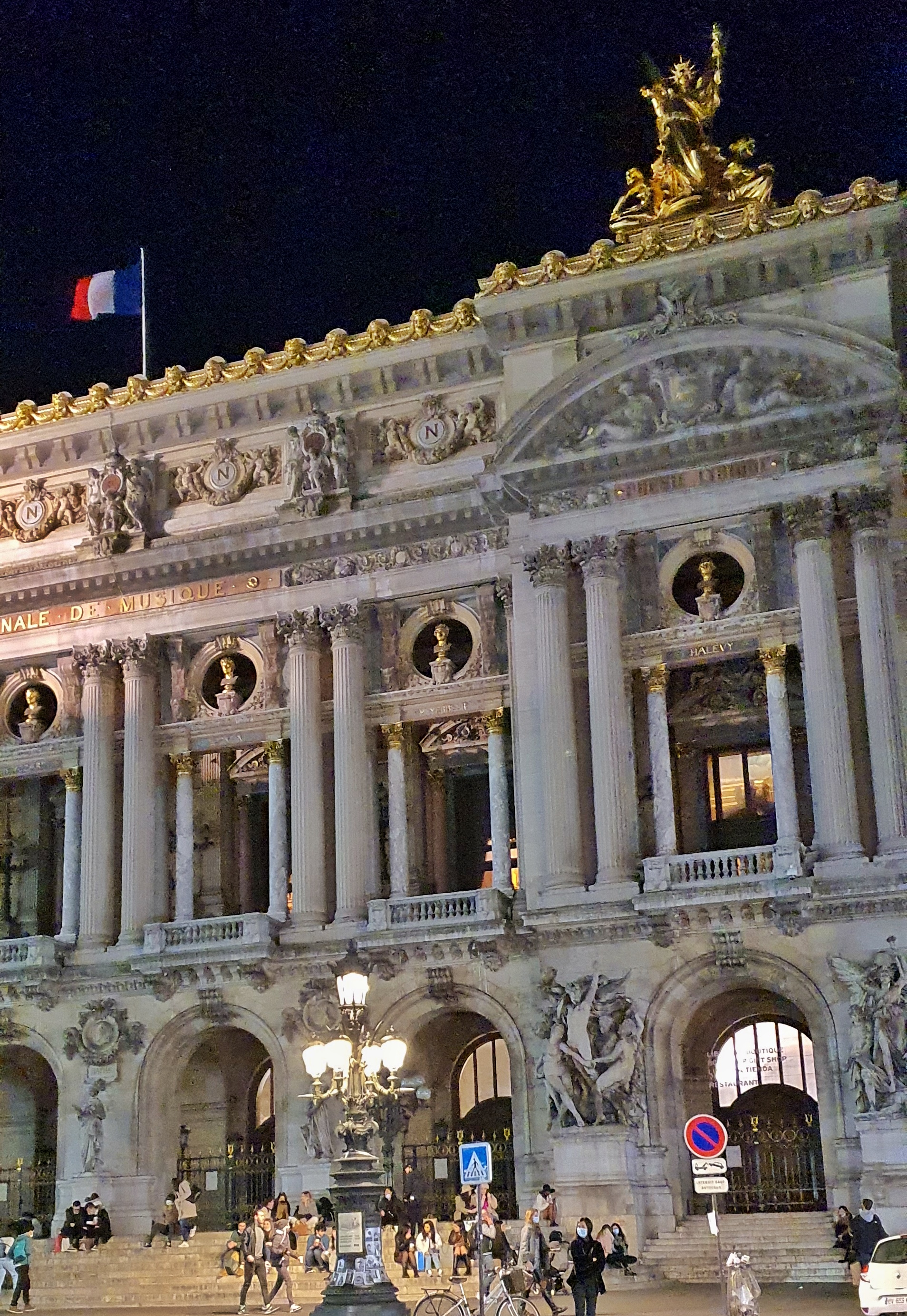 Boulevard Haussmann was behind Palais Garnier and it was all lit up! It was really such a pretty sight and for a minute or so, I had forgotten that this city was still at the mercy of the virus. 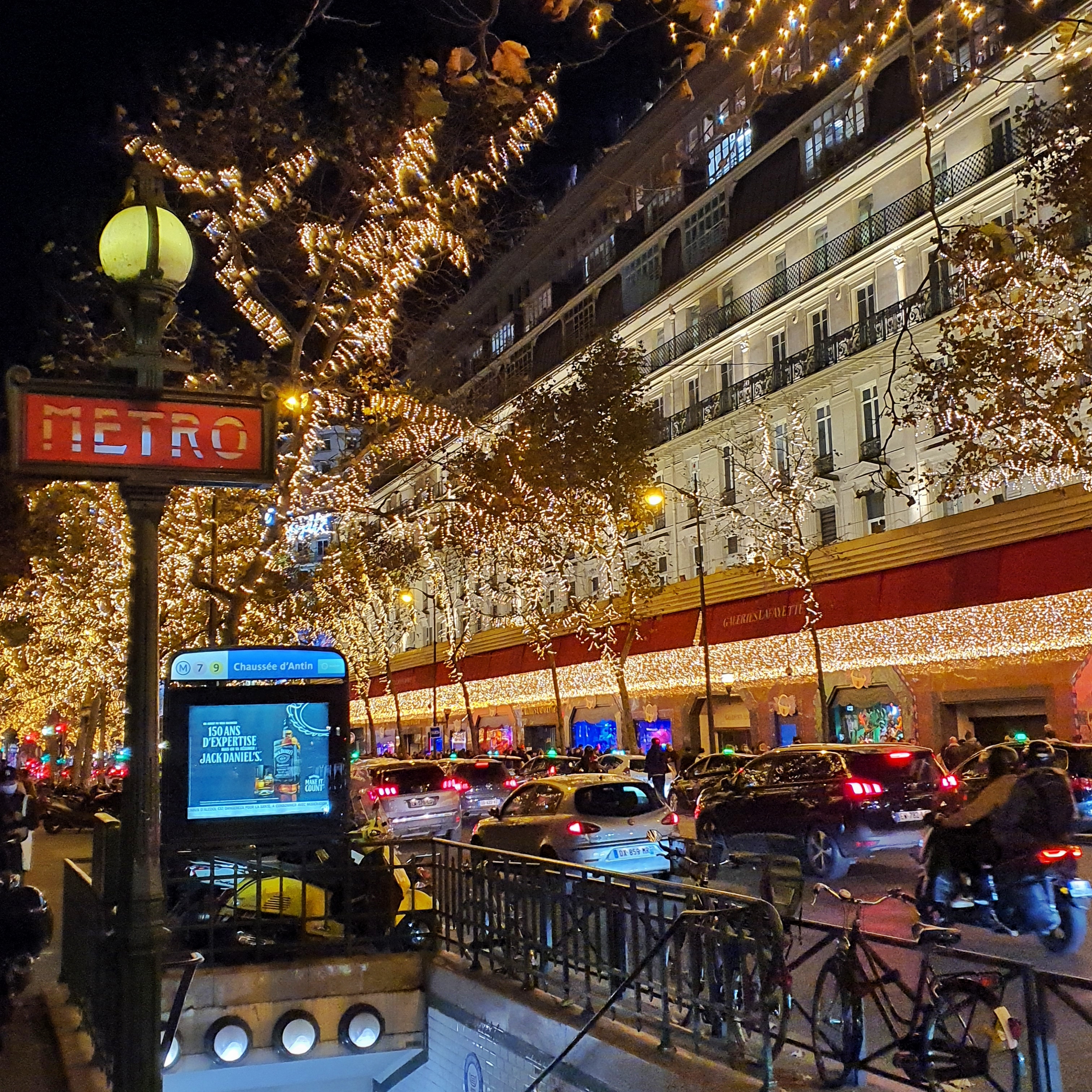 I took photos and short videos of the festive store vitrines for Instagram (for you all haha) as children and their parents also stared in awe and wonder. I can’t believe it. Nearly 9 months have passed. 2020 was nearing its end and most of our year was spent living in fear of an invisible enemy that crippled our lives.

We still have much to be grateful for and to celebrate as the year ends, but we just have to be extra careful and responsible. Celebrate mini milestones while wearing a mask and while practicing social distancing. Wash your hands throughly every chance you get. Our lives may never go back to our old normal, but let’s also not allow this virus to take our little pleasures away!