The bucket bag was initially made famous by Louis Vuitton– their Petit Noe bag was designed in 1932 after a request was made by a champagne producer to make a holdall that would allow 5 bottles of champagne to be carried (4 upright and 1 upside down in the middle). Back in the late 80s to early 90s, the Petit Noe was a big bag hit. The epi leather version of the style was most sought after– and I still remember ladies toting this bag and thinking to myself that I’d love to own a yellow version with the purple suede lining– alas back then those babies sold out like hot cakes and back then, there was no second hand market. 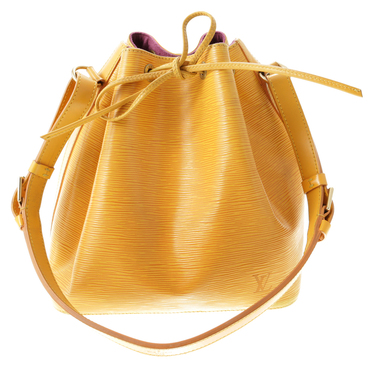 Fast forward to 2000 was the bag style’s rebirth, designed by Mansur Gavriel. And then last year on a trip to Le Bon Marche, I discovered a French bag label, Celine Lefebure. I scrutinized the bag, as I normally would, before I made the purchase. A few months’ post ago, I had actually thought that the bucket bag of Celine Lefebure

I stand corrected. The Celine Lefebure Karin Bucket Bag is cheaper. And while I was a fan of MG bags, I ended up loving Celine’s Karin bucket a lot more. For one, the Karin bucket comes with 2 straps– one shorter one so you can carry it on the crook of your arm or allow it to be hand- held, and the other, a shoulder strap that is detachable and is adjustable in length.

also is made from vegetable- tanned leather, its best- selling piece remains the one in natural as it develops a nice, rich patina over time. The bucket also has an interior lining. It does not have an additional detachable pouch. In the end though, I valued carrying versatility much more than that extra pochette.

There were no other ways to purchase the Karin bucket (as well as Celine Lefebure’s other bags) other than from Le Bon Marche and Printemps in Paris. Until today. Now, her bags are available for purchase online 🙂

Find out more about how to purchase Celine Lefebure’s Bags