Ok so let’s set aside Kanye West’s Messianic rants over the last few months. One thing classy he did was to present Kim with a beautiful cushion cut diamond ring (some may deem it gaudy because it’s massive, but hey, the bigger the ice skating rink for me, the better haha no shame). So that was one of the gifts I totally approved of (not like they would ask for my opinion but hey, let me give my 2 cents worth anyway). And then came Christmas when Yeezus presented Kim with a new Hermes birkin– while that in itself would’ve earned him another 2 thumbs up for me, he had to make that bag extra “special” by asking artist George Condo to paint it.

Granted the bag might be priceless because of that specially commissioned painting, and yes, perhaps that’s Kanye’s way of telling Kim that he’ll buy her the moon and no one else gets a piece of it except her, but HOLY COW YEEZUS YOU MURDERED AN HERMES BIRKIN!! Kim, do not carry the bag– 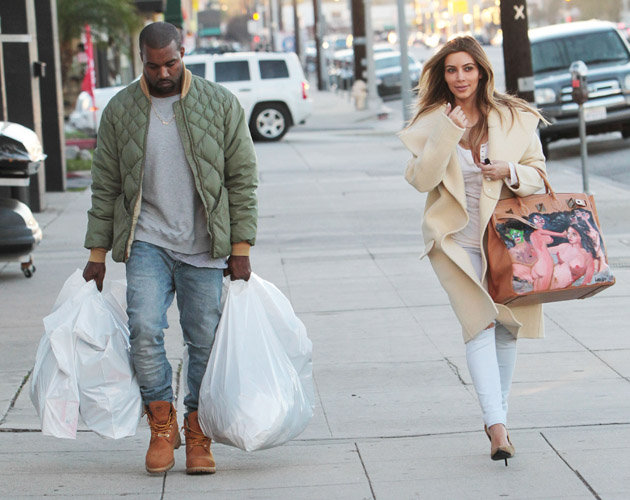 encase the bag in glass where it can most likely be more appreciated– and just instagram it so the world can see what a generous man Kanye is 😀  Holy Yeezus Halleluiah!

But honestly  I really don’t approve of the harem painting ON AN HERMES BIRKIN. Yes perhaps I’m not one of those who can appreciate nude paintings ON A BAG that I will be asked to carry. On a wall, yes. But on a bag that I’ll have to use and carry??? Ahhh perhaps I don’t have enough “culture” like Kim and Kanye *choke*. Would you want to carry a Picasso on your arm?  Hecks I’d encase it in glass and friggin’ Brinks it, but I will not carry it. But I guess that’s how the rich peeps like Kim and Kanye roll 🙂

How do you peeps feel about Kim’s bag? I don’t suppose she will be carrying that bag into church anytime soon, you think? LOL 🙂